Skip to content
Home/Fundraising/Is that fundraiser the best way to bring in cash? Or should you try donor-based fundraising instead?

Is that fundraiser the best way to bring in cash? Or should you try donor-based fundraising instead?

When I use the word “fundraiser,” what comes to mind?

Most people are used to events and sales. Those are what I call fundraisers.

They are activities that are transactional in nature and designed to raise money from a purchase that someone makes from you.

But think about it – have you ever seen a fundraiser that raised a record-breaking amount of money? Can you fully fund your nonprofit’s budget from what you made off your last fundraiser?

Oh, it’s possible. But most fundraisers bring in tiny little bits of money that leave you scratching your head wondering what you need to do next to raise money.

I think most folks who are new to fundraising or inexperienced tend to gravitate to what they know.

They’ve seen fundraisers, been to them, even helped plan them.

There’s nothing wrong with these – they have their place. They can be useful in generating a little money and sometimes awareness.

The problem is that there’s a limit to how much you can raise with one.

In every community on any given day, there’s a fundraiser happening. Sometimes more than one.

And when every nonprofit in town is doing them, they become so common that people stop paying attention to them, which means you have to work twice as hard just to get peoples’ attention.

So, is it possible to raise big money and do it without a fundraiser?

Raise money without a fundraiser

Donor-based fundraising is different than a fundraiser.

Donor-based fundraising is about asking for money with the donor receiving nothing in return. (Or at least it appears that way.)

Many people don’t like this kind of fundraising. Even some who are employed to do it don’t like it.  Yet it’s critical to sustainability.

You can’t create ongoing revenue doing one event after another.

You NEED a large group of donors around you who love the work your nonprofit does and are willing to help you successfully fulfill your mission.

You need people who give money that you can use however you need to, simply because they want to.

So if this is the kind of fundraising that is proven to be successful long-term, why is it so hard? Why is it easier to sell an event ticket than ask for a donation?

The Mindset of Good Fundraising

We tend to steer clear of things that are uncomfortable or scary.

Asking for money leaves us vulnerable – what if they say ‘no?’ What if they don’t like us anymore because we asked them for something and made them feel uncomfortable?

For some people, it’s too much to risk. (By the way, this is why your Board members don’t want to ask for money or invite their friends to your event – it’s all mindset.)

Asking for donations feels too much like begging. And begging is basically settling for leftovers.

Yuck. Who wants leftovers? At best, you’ll get nickels and dimes.

And trust me – you will NEVER fully fund your budget with nickels and dimes.

In this 2.5 minute video, I’ll explain why some people are stuck in the fear of asking for money, and give you a tip that I personally use to overcome that fear. 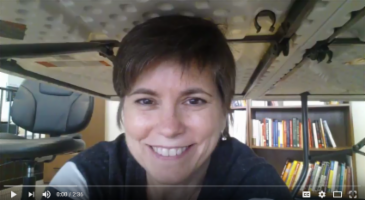 So why DO some people like selling tickets instead of asking for money?

Here are some reasons: 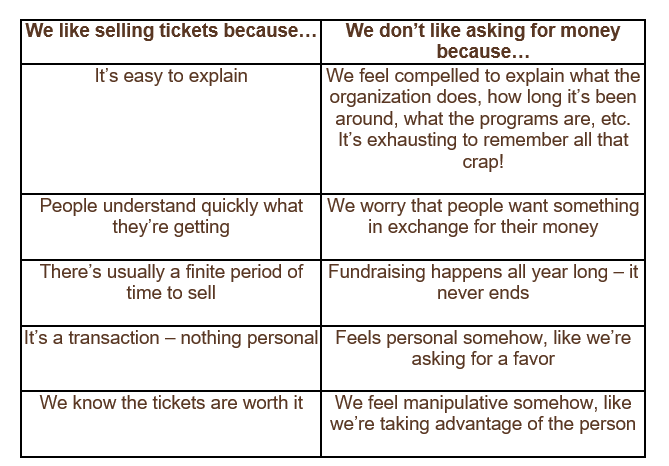 So, what do you do? How do you shift your thinking to stop imagining fundraising as a negative thing?

Focus on the donor

Good fundraising is all about the donor.

Here are some other tips:

The RIGHT kind of Fundraiser

Make it a signature event so that everyone in the community knows about it and associates it with your nonprofit. And make it a ton of fun so everyone looks forward to it, enjoys it, then talks about it for weeks afterward.

Do this 1 event, do it well, then spend the rest of your time on donor development, not more events.

You just WON’T raise big bucks doing event after event. Ditch the events that aren’t productive and aren’t fun for you or your guests.

Once you get that, it’s time to focus on your donors – those sweet people who love your cause and are willing to fund your good work.

If you’re doing LOTS of events and fundraisers now and you rely on that money, you may have to phase them out over time so you can replace that revenue with something else. Face it, $500 is $500, no matter where it comes from. Just make a plan of what you want to let go of and when, and start brainstorming about how you’ll replace it with revenue from individual donors who love your organization and want to support the good work you’re doing.

Then soon, you’ll be off the fundraiser hamster wheel and working on building up a big, loyal donor base.

And that’s where sustainability is.