Getting Started With Planned Giving 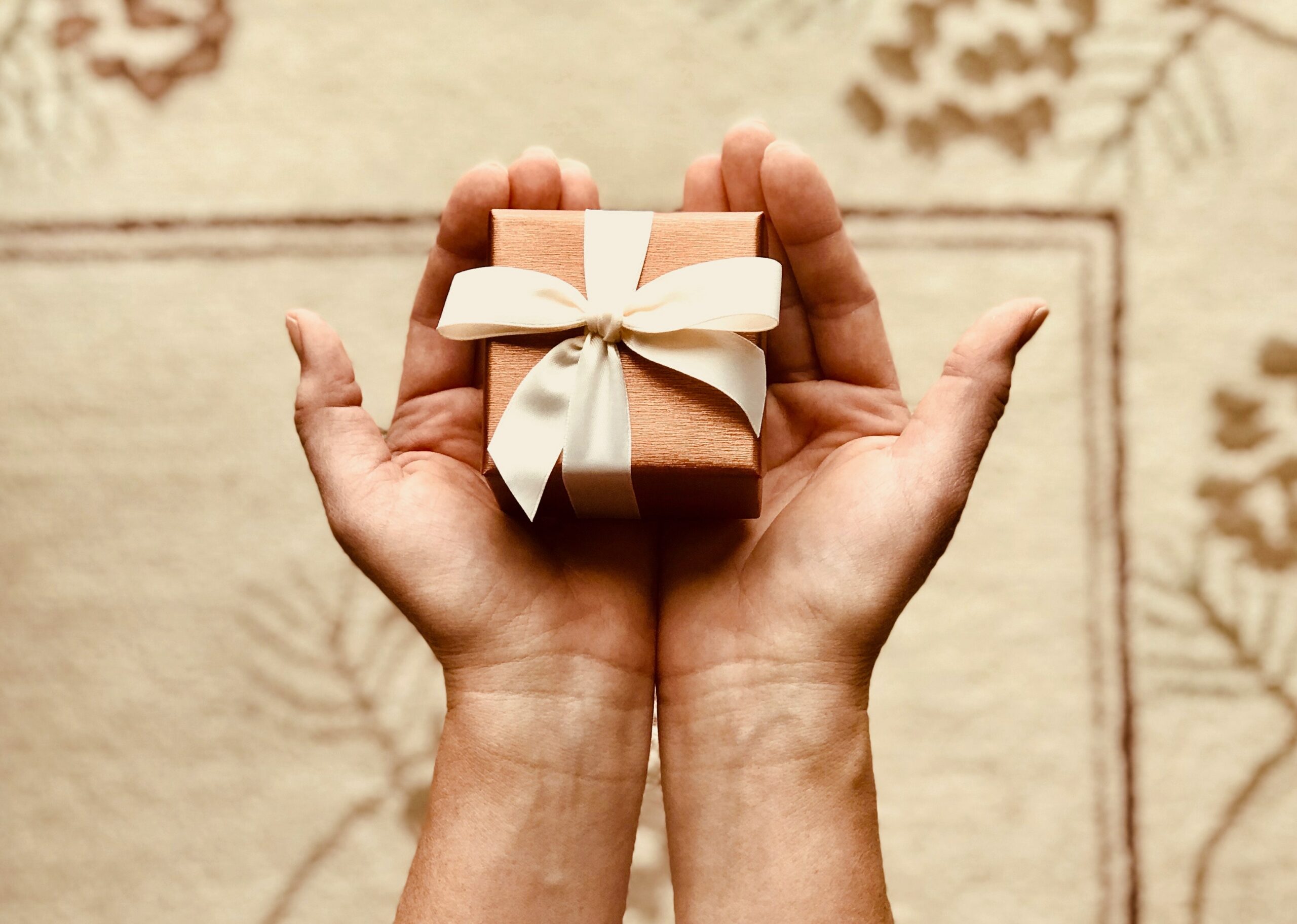 A planned gift is the ultimate gift a donor can give your nonprofit.

It’s usually their last gift. And quite often, it’s their largest gift.

It’s a way for the donor to support their favorite charities beyond their lifetime, which is pretty cool.

And planned gifts can have some surprising benefits.

For example, donors who make a planned gift often increase their annual donations to a charity, according to a study in 2019 from the Giving USA Foundation. That means after they write your nonprofit in their will, they feel more connected and give more during the year.

According to PlannedGiving.com, a planned gift can be 200 times the size of a donor’s annual gift!

If you’re new to planned giving, it can be a bit daunting to learn all the different types of ways these gifts can be made.

It can also be a bit uncomfortable to talk to a donor about their death and the legacy they want to leave.

But look, if you’re not offering donors the opportunity to leave your nonprofit a planned gift, you’re missing out on some big donations!

The good news is that it’s easy to start a simple planned giving program at your nonprofit with just a couple of steps that can easily be part of your annual fundraising plan. 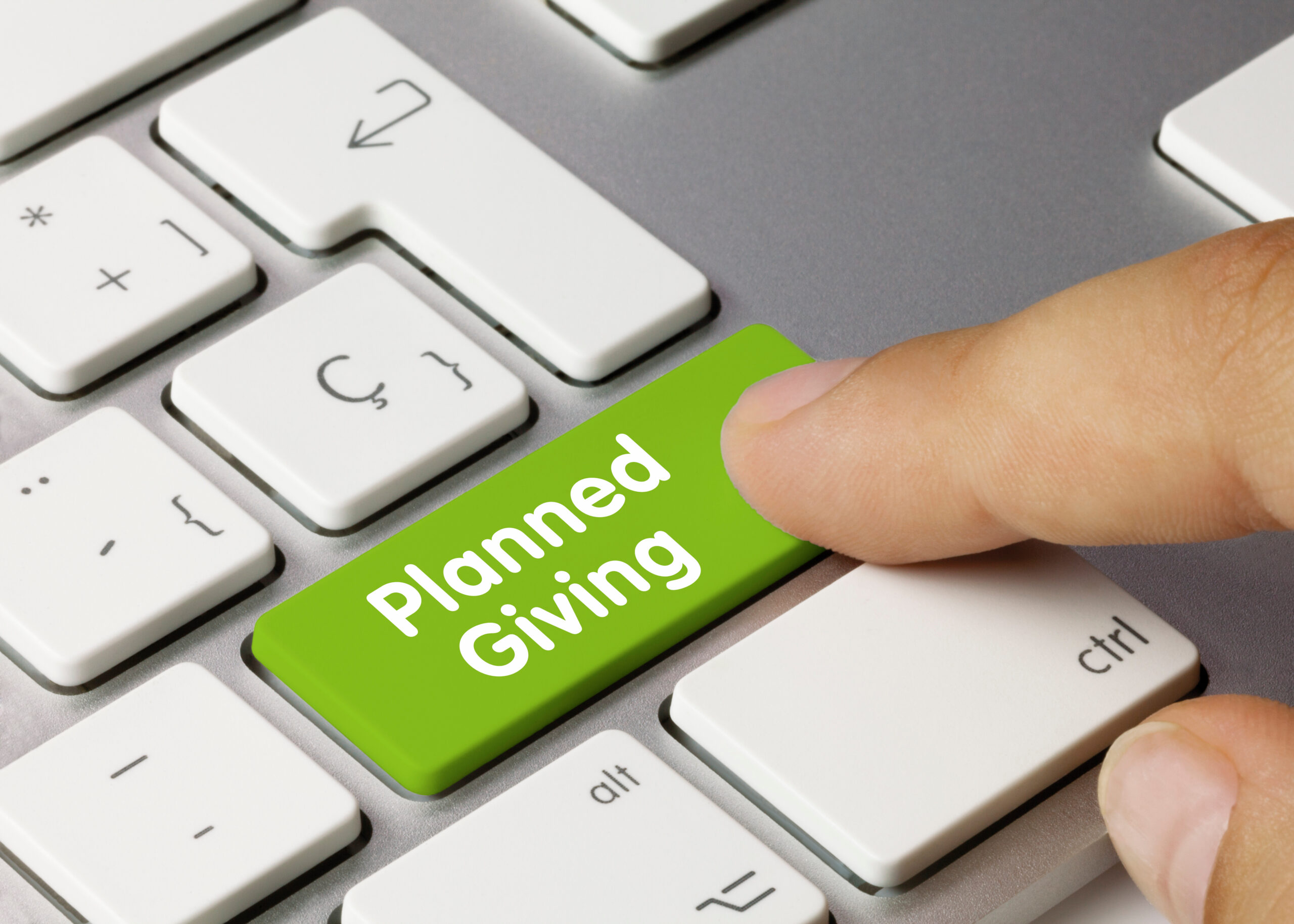 A planned gift is a big deal because it fulfills the donor’s desire to continue to support your nonprofit even after they’re gone.

Sometimes you’ll know about these gifts when the donor makes the decision because they’ll tell you. And sometimes you have no idea because they quietly include your organization in their will without your knowledge.

Either way, it’s all good because the donor made a big decision that could possibly have a long-lasting impact.

Just imagine if one of your donors left you a million dollars! Wouldn’t that change a few things for you? What if they left you $10 million? You could set up an endowment and possibly be set financially from here on. Hey, it happens!

A bequest can be a specific amount of money from the estate or a percentage of the estate after certain other disbursements are made. The donor decides and specifies in their will what you’ll get.

In Fundraising 101, we learn about the donor pyramid and how different kinds of donations fit into the overall picture. Planned gifts are at the top of the pyramid and are considered the donor’s ultimate gift. While there aren’t always a large number of planned gifts, the size of each one can be quite large, definitely larger than your typical donation.

Planned gifts give donors a way to leave a legacy beyond their lifetime, helping to continue the work of a cause that’s important to them. They may designate the gift toward a specific program or project in your nonprofit, or they may leave it to you to use as needed, which is my favorite!

Planned gifts may come from current major donors, but they can also come from people who have been consistently supporting your work for years. It’s not uncommon to receive a sizable bequest from someone who gave $25 per year for 20 years.

That’s why every donation matters, and every donor is important. You just never know who might leave you a large donation in their will!

Getting started with planned giving is easy: simply plant the idea in the minds of your donors.

Those who are serious will take action from there.

Don’t worry about providing legal language or sample docs because your donors already have their own attorney who will take care of all the verbiage and paperwork. If you want to provide options, services like Free Will can help people get started if they don’t have an attorney.

I like to keep it simple: Just remind donors frequently that planned giving is an option for giving.

Here are some ways to remind donors to make a planned gift to your nonprofit:

Or do all of these!

Here’s an example of an image you could use on social media or in a newsletter:

Create a plan for marketing planned giving so your donors know about it. Again, all you have to do is plant the seed of the idea and they’ll take it from there.

It might be helpful to start a legacy society and give it a name so that once someone creates a planned gift for your nonprofit and tells you about it, you can add them to the group.

Some donors will be more inclined to tell you about their planned gift to get their name listed in the society.

There are several companies out there that provide professional, pre-written materials about planned giving that you can brand with your nonprofit’s logo. It’s an easy way to provide information to your donors without having to create it yourself!

I once started a planned giving program by sending out this kind of brochure along with a letter announcing the formation of a Legacy Club for people who had included us in their will. Six people responded immediately to let me know they had already named my nonprofit in their will, and I was thrilled! Over the next year, I built the club up to over 50 people! And while I left that nonprofit before those gifts started rolling in, I had at least put the seeds in the garden for later harvest.

You can get your legacy society kicked off by asking your Board and best volunteers to consider leaving your nonprofit in their will. Then roll your program out to donors who have given consistently for the past 5 or more years since these are the most likely to say “yes.”

Here’s a great example from House Rabbit Society of a planned giving description on their website, using a Legacy Society to encourage giving: 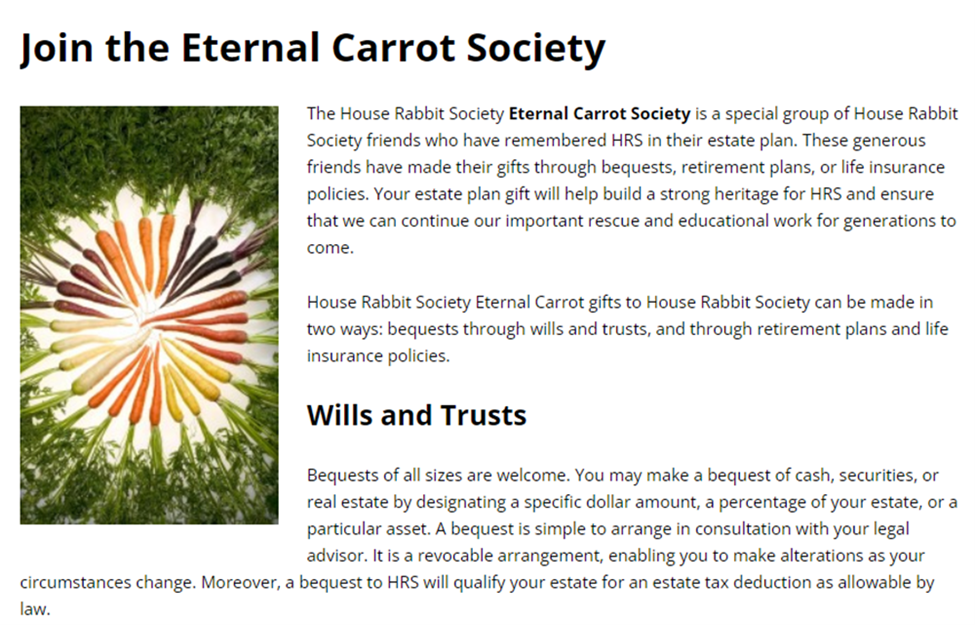 Tips for Getting Planned Gifts

Now, a couple of things you need to know about getting planned gifts.

First, it’s easy to update your will and either add a nonprofit or take one out. So, just because someone names you in their will today doesn’t mean you’ll still be in there when they pass away.

Be ready to nurture these donors in a special way, treating them like major donors if they aren’t already giving large amounts to your nonprofit.

Second, make sure you have a way to track who has told you they’ve left your nonprofit in their will. Find a way to tag people in your database or make a list somewhere – just find a way to track them so you can be sure to give them a stellar experience.

Finally, keep this in mind: for every donor who tells you they’ve left you in their will, there’s another one who has done it but not told you. There’s more of them than you think, so it might be a good idea to treat EVERY donor as if they’ve left you a large estate gift. 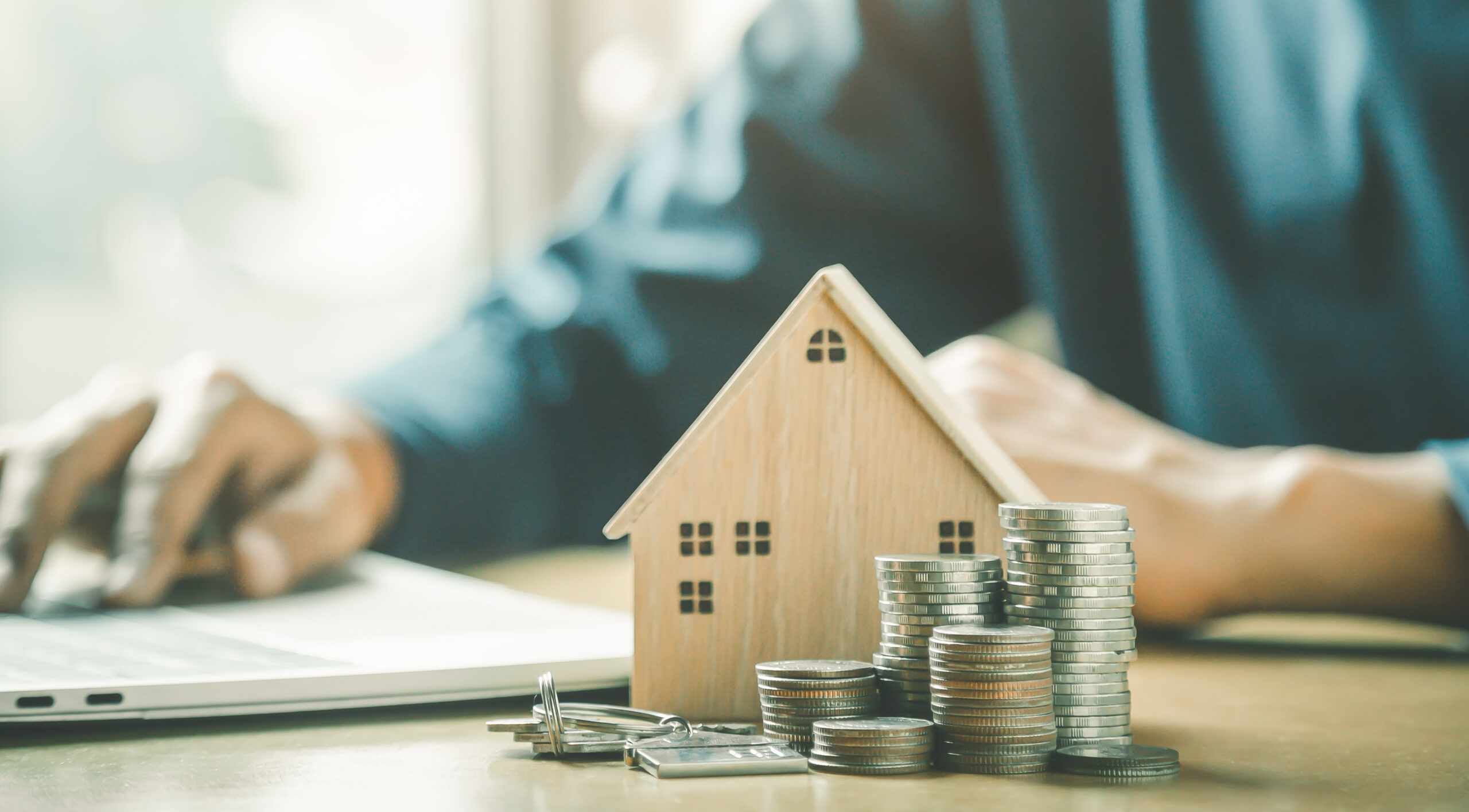 Planned giving can be an amazing source of revenue for your nonprofit.

The good news is that it’s easy to get started with planned giving – just plant the seed of the idea. But, like a garden, you must plant the seeds and nurture them before you can reap the harvest.