How to Plan a Simple Yet Powerful Giving Tuesday Campaign 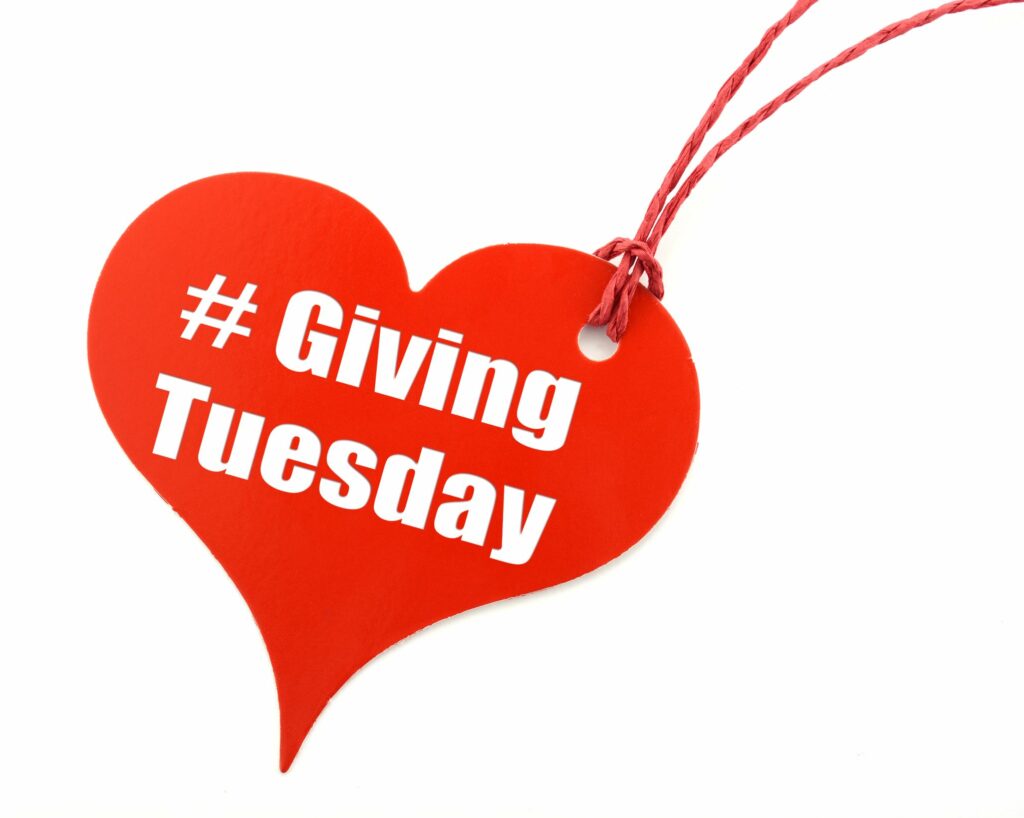 Giving Tuesday is a global day of giving powered by social media, peer pressure (the good kind!), and the good feeling you get when you contribute to an organization you love.

The day has grown into the world’s biggest giving movement and gets bigger every year.

Donors gave an astounding $2.7 billion to nonprofits on Giving Tuesday in 2021.

That’s amazing if you stop and think about it!

On Giving Tuesday, donors who might normally give $25 may step up to give $100 and people who have never given at all may give to two or three nonprofits in a single day.

Sadly, some nonprofits don’t see the opportunity. Instead of making a splash, they only get a trickle of donations.

That’s usually when they start complaining and say that Giving Tuesday is a waste of time.

For organizations that go into Giving Tuesday with no plan, I say they’re right!

They ARE wasting their time by showing up at the last minute, lamely posting a link asking for money. They shouldn’t even bother.

Look, Giving Tuesday requires planning, like any other fundraising campaign.

That planning must include a specific goal focused on a solvable problem. And your messaging must be clear and inspiring, supported by an image or video that tugs on heart strings.

Remember that lots of other nonprofits are raising money on the same day and yes, there is competition. But the competition isn’t for money – it’s for attention.

In order to reach your fundraising goal for Giving Tuesday, you must break through the noise, like a clear bell ringing above the din. And you do that by sticking with a consistent, compelling message that you share early and often.

Let me share the strategies we have seen work wonders over and over again. It’s not hard, and anyone can do it.

Over the past few years, I’ve helped dozens of small nonprofits create successful Giving Tuesday campaigns that raise money for everything from scholarships to Girl Scout camp to new stables for rescued horses.

They all have several things in common that made their campaigns successful and while it’s not rocket science, it’s worth looking at what made each campaign work.

Start by making your Giving Tuesday plan early – about six to eight weeks out (that’s early to mid October). That gives you enough time to think things through and dig into the details of your campaign, like:

1. A specific goal: The best Giving Tuesday campaigns focus on solvable problems. You don’t just want a random financial target pulled from the sky, you need a real number to pay for real things your organization needs. Instead of asking people to help you reach your arbitrary goal of $10,000, tell them that for $77.80, they can sponsor a child in your program for a year and you have 150 kids who need to be sponsored. See the difference?

Don’t be afraid to ask for a larger gift than you might at other times during the year. People tend to give bigger gifts on Giving Tuesday, especially when that gift will help change a life and your donor is clear about how their gift will make a difference.

2. A graphic: You need an image that you can use in social media and in email marketing to visually represent your Giving Tuesday campaign.

While you can find official Giving Tuesday images at GivingTuesday.org, I recommend that you create and use your own. YOUR photo of a dog in your care is way more compelling than the blue and red Giving Tuesday stock image that dozens of nonprofits are using. You can use the Giving Tuesday logo if you want, but stick with your own photos.

On your graphic, share how the donors’ money will make a difference. Use smart design – sharp photos, not too many words, etc. If you’re not a designer, this is a great time to ask a volunteer for help.

Here’s an example of a great graphic for a Giving Tuesday campaign because it tells donors exactly how their gift will make a difference, and by providing 3 options, it gets donors in a shopping mode, choosing which one to give. 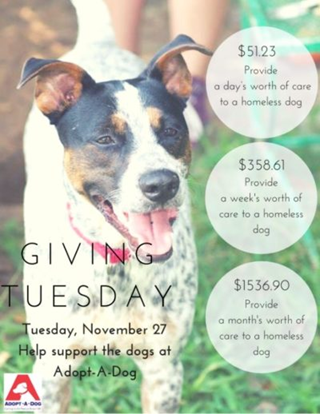 Think about the people who really love your organization’s work and always want to help. All they’ll need to do is forward your emails to their friends and share your social media posts on their own personal accounts. A few key people with LOTS of connections can help you reach dozens or hundreds of new potential supporters for your cause.

4. A matching gift: Campaigns with matching gifts ALWAYS raise more money than those with no match. And when you start your planning early, you have time to identify and approach a donor who knows your work well for a large matching gift of $5,000, $10,000, or more. The donor can be an individual donor, a family, a business, a foundation, or members of the Board. You might be intimidated to ask for such a large gift, but your donors will be flattered and excited for their gift to get stretched even further.

Matching gifts are very motivational for donors. When you tell someone, “Your gift will be doubled,” people tend to give more. It really is that simple.

5. A Giving Tuesday donation page. Create a unique donation page on your website just for your Giving Tuesday campaign so you can repeat your Ask on the page. This helps people know they’re in the right place. Add a short description of what you’re raising money for, photos or video of your organization in action, and a donation form where the Ask amounts reflect what you have on your graphic. Also create a thank-you page that people land on after they donate so they will be immediately thanked for their gift.

Go ahead and write the thank-you email that automatically goes out when people give. Both the thank-you page, and the automatic email need to reference the Giving Tuesday campaign so that everything is tied together.

Finally, test everything before you launch your campaign to make sure it’s working correctly!

Once you nail down all these details, put everything in a document you can share with your Board, staff, key volunteers, and your Giving Tuesday campaign ambassadors. That way, they can understand what the campaign is about and refer back to it again later if needed.

YOU can refer to it as you write campaign emails and social media posts, making your work easier.

Okay, here is our Giving Tuesday campaign strategy, honed over many years of helping small nonprofits maximize the day.

It’s 11 steps, and that might seem like a lot, but if you work through the steps one at a time, you’ll get them all done. You’ll use the same message and image again and again to create consistency.

1. Two weeks before Giving Tuesday: Send a teaser email to your whole list, letting them know what you’ll be raising money for and how they can help on Giving Tuesday. Mention the matching gift. Debut the image you plan to use throughout your campaign. Encourage supporters to share with their friends and family and consider giving early. Provide a link to the Giving Tuesday donation page on your website for those who want to give early. Post this same message to your social media channels.

Add a blurb about your campaign to your email signature, and encourage staff, Board members, and supporters to do the same.

This teaser email is important! We’ve had multiple clients reach their Giving Tuesday goal from this email alone!

2. One week before Giving Tuesday: Send another email to your whole list. This can be similar to your first email and should include your special Giving Tuesday graphic. Again, remind people that they can give early and invite them to share with their friends.

Post a reminder on your social media channels that day letting people know what you are raising money for, the goal, the match, and, finally, the link for those who want to give early. Use your campaign graphic again.

3. On Thursday before Giving Tuesday, which is Thanksgiving in the U.S.: Send an email with a thank-you image or video to your whole list. Thank-you videos are incredibly powerful to let people know how much you appreciate them.

Post the video on your social media channels. You want as many people as possible to see it and, believe it or not, Thanksgiving is a big day for social media, as people seek connections with their friends and family members who live far away.

Use our YouTube Playlist of donor thank-you videos for inspiration.

4. On Monday before Giving Tuesday: Send another email reminder and post on social media. Share how much you have raised toward the goal. For consistency, use the same message. I told you that you would get a lot of use out of that Giving Tuesday graphic!

Send texts to any supporters you communicate with by text, reminding them to give on Giving Tuesday.

6. Just after lunch: Do a Facebook Live talking about why your campaign is important and how lives will be changed. Talk about how the donor can make a difference. Ask people to give. Tell them exactly how to give.

7. Mid-afternoon: Send out another email telling people how they can give. Provide an update on how much you have raised. Remind them about the matching gift, if you have not met the total match yet. Use your Giving Tuesday image, and include the link to your Giving Tuesday donation page. 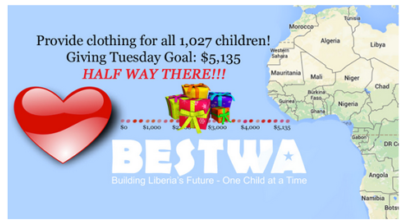 8. Late afternoon: Time for another Facebook Live! This time share a story of a life that your organization has changed or of someone waiting for services. Ask people to give and tell them how.

9. After dinner: Send out one final email with an update. Remind people of the goal you are trying to reach before midnight, and let them know that you would love their help in reaching that goal. Ask them to share with their friends and family members. Include your Giving Tuesday graphic and a link.

10. At about 8 p.m.: Time for another Facebook Live talking about the Giving Tuesday campaign, why it matters, how lives will be changed, and whether there is any money left on the matching gift. Then ask people one last time to give! 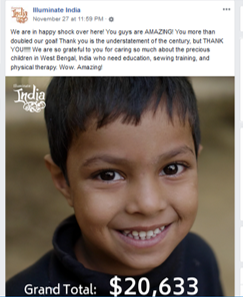 That’s it! By the time it’s over, you will be very ready to retire that Giving Tuesday graphic! And you will also be excited to have had such a successful Giving Tuesday campaign.

Giving Tuesday is an important part of a smart year-end fundraising strategy and a terrific opportunity to communicate with your supporters, sharing the story of what your nonprofit does and why funds are needed. It’s a time to gain new donors and spread the word about your cause.

If you plan your campaign well, you will raise money.

People who say it doesn’t work don’t plan. They show up on Giving Tuesday and say, “Here we are! Give us money!” Then they feel bad, mad, or sad when they don’t get donations.

By planning ahead, asking people to give to something specific and something that matters, you’ll get results.

It’s those results that make it possible to change more lives. And that’s what we’re here for.

Get the Word Out: 5 Tips for your Giving Tuesday Campaign 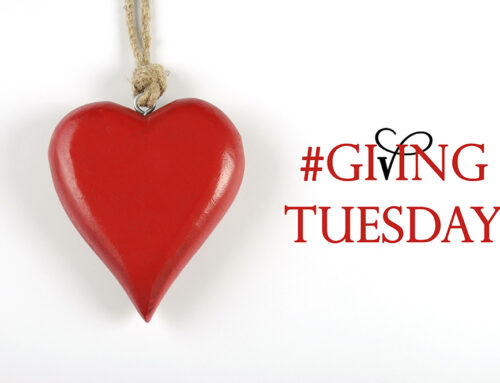 The Best of Giving Tuesday 2018