Asking About Asking to Get the Big Gift 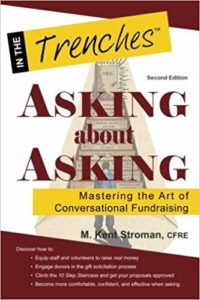 I love sharing good resources with you and I’ve got a good one today!

My friend and colleague Kent Stroman has written a book called “Asking About Asking” and it’s a must-read for those thinking about or already working with major gifts.

If you shudder at the thought of asking someone for money and you’d rather do ANYTHING else, this book is for you. It walks you through the process of donor cultivation in a way that is gentle on both the nervous Fundraiser and the donor. If you follow the guidance in the book, you’ll feel like you’re just having an authentic conversation.

Kent addresses all the common questions that most folks have about major gifts in an easy-to-follow formula.  His premise is that if you ask all the right questions, you can easily get to a “yes.”

“Asking About Asking” covers who to ask, how much to ask for, and what to say.  Kent goes into a lot of detail in his 10 Step Staircase to help you know when to ask, who to include, and more.  The 10 Step Staircase (which I love!) looks like this:

The book is an easy read and is chock-full of practical information and stories from the trenches.  Here are some of my favorite quotes from the book:

“There simple are not enough $1,000 gifts available to take the place of a $1 million contribution.”

“Effective fundraising is not a guessing game…it’s an asking exercise.”

“Fundraisers’ discussions should always be focused at the point where the donor’s vision overlaps with the charity’s mission.”

“Effective fundraising is more about the relationship and less about the transaction.”

“Never guess when you can ask.”

Get your copy of Asking About Asking at Amazon.