How to Raise Money for Your Nonprofit Without Working 24/7

Learning to say “no” isn’t easy.

Most of us take on more than we can manage.

I seem to have some subconscious desire to be Wonder Woman – I’m always biting off more than I can chew.

I remember as a Development Director, I would take on a LOT of projects, and work furiously to get it everything done. I took things home almost every night and sometimes weekends, too.

Most of the time, I got it done. I was good at rounding up volunteers and I had some good interns.

Sometimes, it was ridiculously stressful.

Why did I do that? Why do YOU do that?

I think it’s because we want to do well. We want to be successful. We know that when we raise more money, we can change more lives.

I think it’s also because we haven’t learned how to draw our boundary lines for ourselves.

It’s not something we’re taught in grade school. No one pulls us aside and says “Here’s how you take good care of yourself.”

So, I thought you might like to meet someone who has done a FABULOUS job of saying “no” and is still very successful. 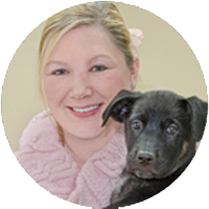 Courtney is the Director of Development at the Humane Society of Greater Dayton.

She’s been in the job a little over two years, and at the time, was brand new to the world of fundraising. Previously, she worked in pharmaceutical sales.

Courtney also is a wife and a Mom, with four school-age kids.

While Courtney is committed to being successful on the job, she’s not willing to let it bleed over into her home life.

I started working with Courtney after she’d been on the job just a few months. She has a great understanding of the power of relationships, and has been able to translate her skills to fundraising pretty easily.

I was stunned when she told me she does not have email on her cell phone.

“It was a conscious choice. In my previous job, I had a ‘CrackBerry.’ I was working all the time, and the boundary lines were very messy. Even though I was successful, I wanted something different. I wanted to spend more time with my kids and less time on conference calls. When I took this new job, I knew I needed more work/life balance and I knew I needed to negotiate it from the beginning.”

She says it was a shock at first for everyone. But now they’ve learned that if they email her in the evening, they won’t hear back from her until the next morning. And guess what? It’s working out just fine.

She put her boundaries in place during the hiring process. She told her new boss what she wanted and he was hesitant at first. She says she had to prove that she could do the job during normal work hours.

Think about that – years ago, we expected people to get the job done during the day. Now it’s kind of odd. Weird how things have changed!

Courtney works her schedule so she’s off one half day a week. That gives her extra time with her kiddos. She makes it to all the holiday parties at school and reads in the classroom.

She says that at first, other staff were jealous. Of course, once she started raising big bucks, it was easier to justify her schedule, but the truth is that anyone can create a schedule that supports them and their lifestyle. Courtney points out that most staff didn’t understand the life of a Fundraiser. “We wouldn’t ask other staff to go to an event on the weekend or spend their evening writing a grant. Once they understood, it got easier.” It’s amazing how much more productive people are when they’re happy!

I was curious how Courtney got her new employer to agree to this unique situation.

“It took several meetings. It wasn’t easy, but I didn’t give up. I knew what was important and I wasn’t giving in.”

I’m sure that took a lot of nerve and being willing to lose the job because of the limits she asked for.

“On your deathbed, you won’t say ‘I wish I would have worked more.’ You’ll probably wish you’d spent more time with the ones you love. That’s what I’m doing.”

Courtney leads by example. Her team also has some flexibility in their schedule with some working part of the time from home. “Our office is so small, we wouldn’t all fit in here anyway. And there’s no privacy for making calls to donors.”  The organization is mid-way through a capital campaign that will help alleviate that problem soon.

Courtney’s advice to others is this: “Figure out what works and create a culture of acceptance. Help non-fundraising staff understand that raising money doesn’t fit neatly into a 9-5 job.”

After she started to work at Dayton Humane, Courtney helped start a ‘Sunshine Committee’ with the purpose of strengthening moral and helping staff to get to know each other better. It’s been a big hit and the organization has an amazingly strong culture.

“An organization is only as good as its people. If they don’t want to be there, you’ll have problems.”

My big takeaway from Courtney is that you don’t have to work 24/7 to get the job done and be successful. Courtney brought in thousands in corporate sponsorships and major gifts in her first 6 months on the job, very quickly proving that she could do the job, do it well, and do it the way she wanted to do it.